This is the fourth part of the four part series from Red Hawk – Mesa Property Managers about the history of Mesa, Arizona. Continued from The History of Mesa Arizona – Part 3.

The Valley has played host to diverse cast of characters, from the early Tohono O’odham, or Pima, who may have been preceded by (and who may have descended from) the Hohokam, to modern-day residents of every race and almost every nationality. The Tohono O’odham had a thriving civilization that was the subject of the book “A Pima Past,” written by Anna Moore Shaw. After Mormons arrived in the Valley and set down roots, African Americans followed, many of whom led successful lives. There was the first African-American family to come to the Mesa area, the McPhersons; they arrived in 1905. An African-American veterinarian was another early arrival in 1910; his name was Dr. James Livingston. More African-American families arrived before 1920, called Moore, Hall, Kemp, Ferguson, and McKelvy.

At the same time, East Asian communities were forming in the Mesa area. Japanese and Chinese families arrived to do business and run farms, with a sizable wave around 1910. In fact, Mesa’s mayor from 1992 to 1996, Willie Wong, is a descendant of one of these families that called Mesa home. Additional family names associated with early Chinese settlers are Yee, Hom, and Lee; Japanese families living in Mesa at the time included the Ikedas, Okazakis, Suginos, Nishidas, Horibas, and Ishikawas.

However, Hispanics were forming a community in Mesa well before African Americans and Asians arrived, around the 1890s. One of these families, the Mendozas, were police officers; other Hispanic households in the community were the Candelaria, Garcia, Castro, Aros, and Rivera families. 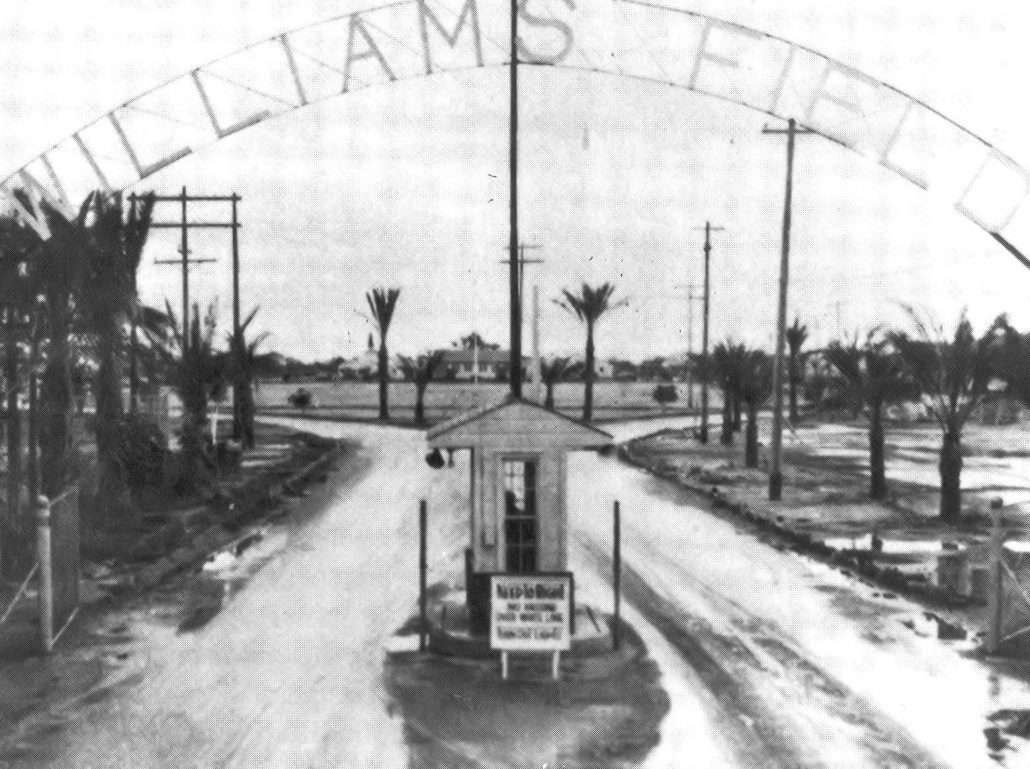 Williams Airforce Base, 1942. Courtesy of The Wikimedia Commons

The Mesa area flourished during the Second World War because the area became home to military bases and troops. Both Falcon Field Airport and Williams Air Force Base opened in 1941, with Falcon Field serving British soldiers and Williams serving U.S. troops. Many of these troops later brought their families back to the Mesa area, and in the late 1940s, the increased use of air conditioning allowed more people to live in the area comfortably. In the 1950s, aerospace was a hot industry, but farming of citrus, cotton, and other crops was still a major industry. As the decades rolled by, technology and health care became major industries.

Mesa’s got some older architecture that will thrill aficionados. At 160 North Center is the Sirrine House, constructed in 1895, and the Lehi School still stands all this time after its construction in 1913. 1904 saw the construction of the Vance Auditorium at 250 West Main Street, known for its fantastic dance floor. An interesting comparative note: Look at a map today and you’ll see Mesa and Phoenix nestled close to one another. Back in the days before cars were common, though, people from Phoenix had to take a train over to Mesa if they wanted to see a Broadway play that happened to be at the Vance. The Vance became the Mezona when it was purchased by Mormons, though shows continued. The Mezona Inn now stands where the Mezona Auditorium used to be.

Mesa experienced a lull when cotton prices dropped in the 1920s. However, other than that, the region has experienced terrific growth. Mesa had the fastest growth rate per the 1990 census, and the decade of the 1990s saw over 100,000 additional residents living in Mesa. It’s now the third-largest city in the state and helps anchor the Phoenix-Mesa Metropolitan Statistical Area.